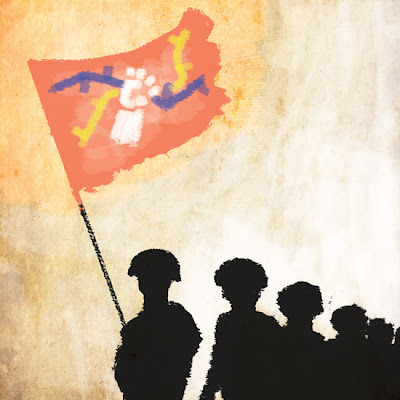 Apologies for the slight lack of posting. I would have liked to get a couple more in this week but events here in London have conspired against me.

First there was the tube strike. The only real Union with any power that manages to affect my life in an incredibly destructive way hit again this week with the (almost) total shut down of the tube network. I rely on the Central Line to get me across town every day from my hobbit hole flat to my place of day-job work. They shut this line completely. They also shut every other line heading east into town.

This meant I was left with two options, the bus or the walk. Now, the thing is there is no bus that covers the same distance and direction as the tube does. I had to get three buses to cover the same ground. Oh and did I mention that along with myself there were 3 million other displaced passengers?

So I fought my way onto bus number one to get home on evening one of the strike. The strike started at 4pm. I made it home around 10pm after getting frustrated, walking vast distances and stopping occasionally for alcoholic courage to continue my journey. I awoke tired and muzzy headed from the night before to begin another refugee style push, shove and squeeze journey back across town. Once again I estimate that around various bus journeys I walked a good 3 miles to speed things up.

The only problem with walking 3 miles around town was that after a few pints on my way home the night before I managed to drop the biggest cooking knife we have onto my bare right foot point first. Ouch. You know that phrase "a stabbing pain"... 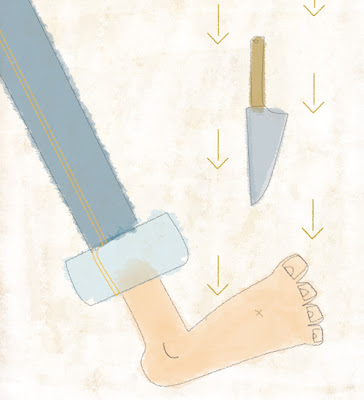 So I blame the unions for my foot, my current state of tiredness, the screws up I made at work today because I was tired and my lack of posts on my beloved blog. So I painted this; 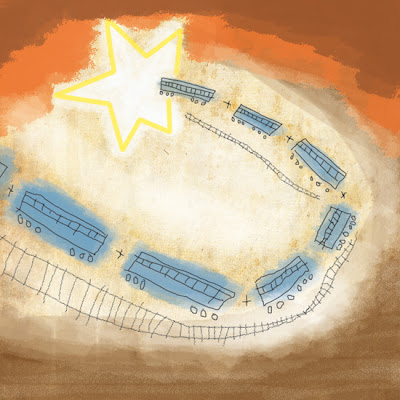 Not sure it's a great image and not sure I should really be drawing pictures of crashing trains since I take one everyday and fate has a habit of biting people in the arse.

Anyway, I don't believe in all that rubbish.

Now, where's my receipt for that armoured suit...?

Ever heard of "The Bus"? Well, there's this bus, right. It's fallen off a cliff and is heading, at speed, to a fiery death. Now, everyone gets their own bus and can put whomever they like on the bus as it heads off the cliff. People you may like to put on your bus could maybe be annoying celebrities, someone who cut you up in traffic, that guy who sits next to you on the tube and eats a Big Mac, spraying you with burger juice... I had to use Vista again the other day. Bill Gates? He's on my bus. 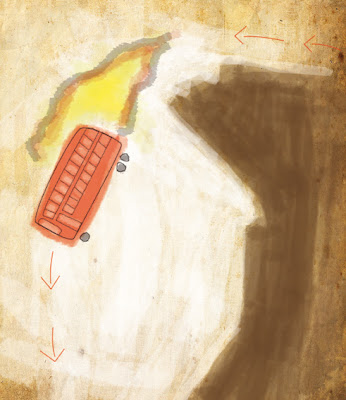 So if I was succumbing to all of the pent up commuter rage inside me, I would put every man women and child who went on that strike and messed up my life for 3 days in the train in my painting heading to their deaths. I'd need a train for them all, rather than a bus, due to volume.

Bit harsh, really, so I won't.

At least, not this time! Apparently they might strike again next week. Make sure you check back to see what kind of drunken injury I can do to myself then and if I give in to rage and send that train off a cliff after all...!

Oh, and to clear up another question, I don't think they really do have children working on the underground. I mean, I've no idea what goes on after 12.45am and before 4.30am, but I can honestly say I've never seen any children working during the day...
Posted by Reeko at 12:00