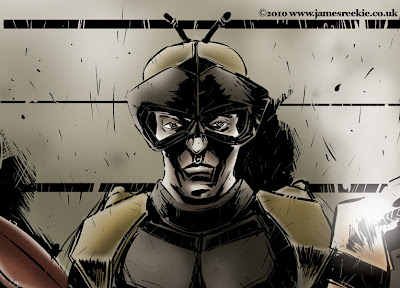 Crop from "Most Wanted" illustration for BBC Focus magazine. Linework in Manga Studio, colour in Photoshop.
Robbie Bennie, Deputy Art Editor on BBC Focus Magazine commissioned me to produce an image for a short article on "Nature's Assassins", insects and fungus that "take out" destructive pests. Robbie gave me the concept of turning the insects and fungus into comic book style super villains in a police line up based on the famous "Usual Suspects" poster. 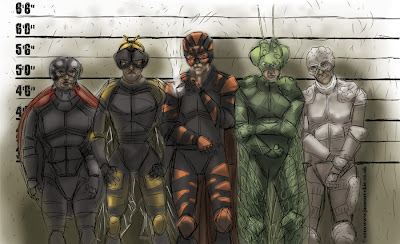 Rough sketch for "Most Wanted", linework in Manga Studio, colour in Photoshop.
Diving in with both feet I drew up a rough based on the poster, using the same poses but designing costumes over the top. Left to right the deadly assassins are; A ladybird (Targets Aphids) , Hoverfly (Aphids and leafhoppers), Rust fungus (the rubber vine weed), Lacewing (Too many to mention) and another kind of fungus not named in the copy I was sent!
Aside from the difficulties of designing costumes based on a white mould, I was having a blast! After the ok I moved onto the final linework and colour. 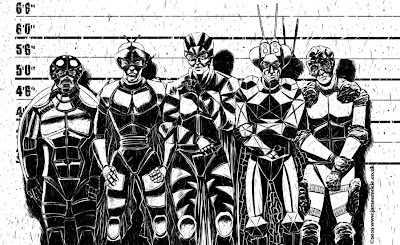 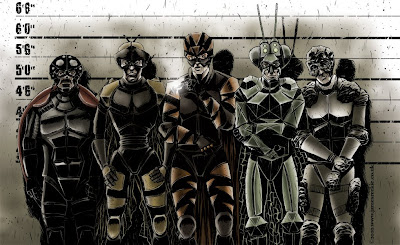 Final artwork for "Most Wanted", linework in Manga Studio, colour in Photoshop.
The article is in the May issue of Focus which I think is out now. Have a great week!
Posted by Reeko at 06:29