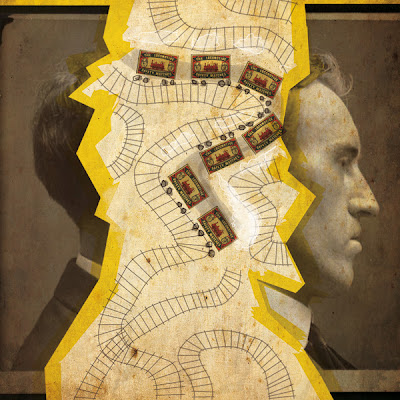 This idea was spawned by this image of a train crashing that I produced whist angry about the train strikes. I was scribbling in my sketchbook and started drawing some thumbnails of a "Train of Thought". Initially I got bogged down with clouds on rails or imagined trains crashing through people's heads. All very classic me and certainly not particularly challenging. 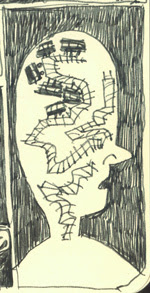 This is one of those thumbnail you scribble out and you just know exactly how you are going to realise it to the final image. I cut a head in half placing some jagged lines to give the impression of masking tape. Originally I painted the background darker but I dropped out this layer as it began to throw the tones of the piece out. I drew in the lines of the track and began to fish around for a decent idea of what to use to collage the train.

I hit upon the idea of using a matchbox after wanting to use some kind of toy train and then thinking about sparks of ideas and lightbulbs. I browsed a host of fascinating sites hosting galleries of long forgotten incredible matchbox design and illustration until I came across this perfect image; 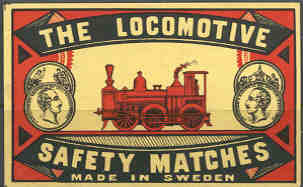 So I copied and pasted, a little more paint and job done! I'm really pleased with this one.
Posted by Reeko at 18:32