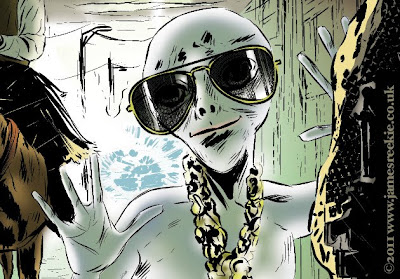 Crop from "Aliens" for Wired Magazine, Art Direction Alice Cho, line art in Manga Studio, colour in Photoshop
Just as I was about to leave the house for bonfire night fireworks (yes, it was that long ago but I wasn't allowed to post until now) I was contacted by Alice Cho at Wired magazine. She commissioned me to illustrate four films, due to come out in 2011, that feature alien invasions. The films were World Invasion: Battle LA, The Thing, Paul and Cowboys & Aliens. The catch, aside from trying to fit all these films into one image, was that most of these movie's hadn't even released a publicity shot. 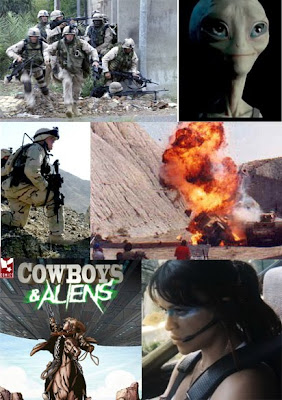 Reference for "Aliens"
I scavenged what reference imagery I could and produced three roughs, mainly playing off and thusly becoming a little homage to the overhead ship composition from the Cowboys & Aliens cover by (I think) Luciano Lima. 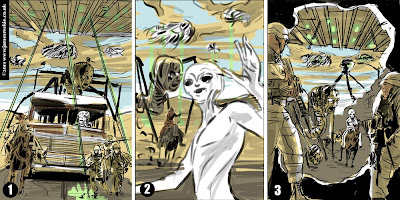 Initial roughs for "Aliens", drawn & coloured in Manga Studio
At this point the copy got cut down to only three movies (loosing the remake of The Thing) so I was asked to redraft version 3, adding in Paul from version 2 and a larger cowboy behind him to create the new rough below. 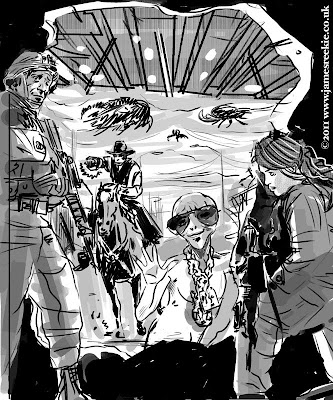 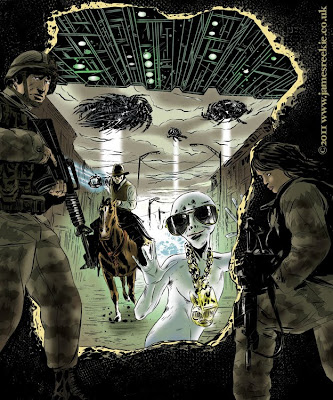 Final art for "Aliens", line art in Manga Studio, colour in Photoshop.
Have a great week!
Posted by Reeko at 08:20