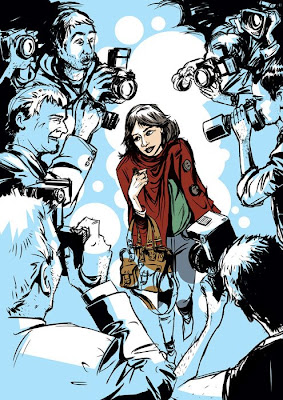 Inspired by the Dave Gibbons Watchmen tutorial I decided to try out the application Manga Studio. My standard working practice is to draw in pencil or ink and colour in Photoshop. I have, however, become bored with scanning and retouching and decided to have a play and see if I can work entirely digitally.

I thumbnailed my idea out as usual. 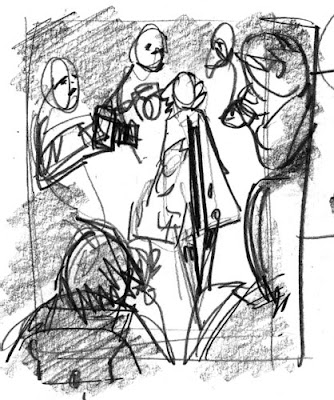 I then jumped straight into the application and, after finding sufficient reference, sketched out the figures using a pencil tool. I then made a new layer and inked away. 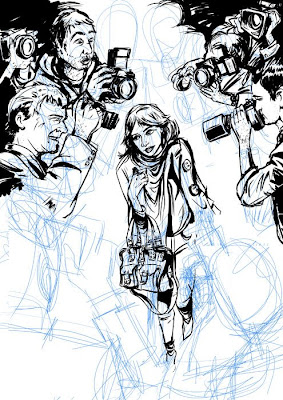 For colour, I exported the image and worked in Photoshop as normal.

I think it's a great application, very easy to use and I love the "ink" line quality. I didn’t time the process, but I suspect it was faster than normal. However, I think the finish is pretty classic comic book-y which is obviously what the application is designed for but not completely what I'm after in my illustration. Also, working exclusively with the wacom tablet has done nothing for my RSI.

I think I'll have another play or two. It's definitely a useful tool to have in the arsenal next time that style is required.
Posted by Reeko at 15:41

A Fleeting Glance at Portobello Market 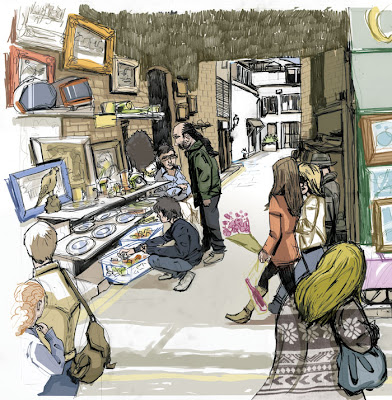 The Portobello Antiques Market is a strange place. The street is full to bursting with people, yet fails to feel vibrant. I prefer to make my approach by slinking up the back streets to sit and drink a cold one outside the pubs further up Portobello Road towards Ladbroke Grove, watching the mix of people, old money, new money and no money congregating in the streets.

Antiques leave me cold. Always have done. In the V&A for instance I tend to take a greater interest in the people wandering around rather than the assorted thousand year old nick nacks “collected” by Knights of the British Empire from around the globe. I like painting and drawing, buildings, machines and musical instruments. The ceremonial vase of whoever might make a nice footrest, assuming of course that you cover it with a cushion first.

I guess it’s no surprise that when I wander the street passing the antique shops filled with coins, medals, mirrors and other gold shiny detritus, squeezing down the hill, one hand on the wallet, one hand braced for balance against suddenly stopping Italians and Chinese tourist groups that I’m just looking for the nearest bar.

Come join me! We’d better be quick, the sun is shining, but this is England. It might be our last chance.

Oh, and bring your scarf. Sun doesn’t mean warmth in this country either.
Posted by Reeko at 15:05 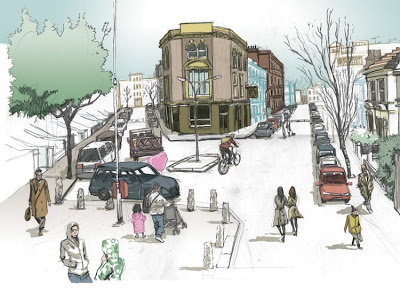 Welcome to frontier country folks! I heard tell of gold in these mountains!

This is our house, in the middle of our street. A strip of stained tarmac lancing south from Shepherd’s Bush Green in sort-of-wild west London. With a heavy dosage of irony the hopeful residents of this confused village have renamed it Chez Boo. Mais oui! C’est bon, silver plate! The culture clashes have only just begun.

The large green building in the centre of the image is The Duke of Wellington public house, a fairly sketchy establishment, rising like a cavalry fort manned by plaster stained builders, staggering drunks and Pit Bulls, defending the area from gentrification. To the left sits Kensington and Chelsea, Holland Park nannies, bankers and Bentleys. To the right, the chicken shops, Polish deli’s and mosques of the Goldhawk road. To the guests of the Kensington Hilton just over the bridge who have turned the wrong way looking for Notting Hill Gate and Hyde Park, this pub is your first sight of The West. Tread carefully now.

The street is a battleground. Television studios, a five star hotel and spa sit alongside council flats and butchered town houses bursting with studio flats and languages. The tenants spill out onto the street, drinking and arguing, gossiping and chatting, mostly speaking the broken English of Commerce and Getting By.

Richmond Way is always changing and busy, a throughway turned dead end, cut off by the road bridge leading east to the West End and west out to Acton and further to Heathrow. Every week you see new backpackers arrive, mainly Australian or South African. The border town feel is increased by the temporary nature of their lifestyles. Swapping Ikea furniture and old big backed TV’s, they sub let and share with the freedom of The Big City Adventure. We once had a group come straight into our flat with a key. “Erin said it was ok!” said the lead girl with a big, excited grin, as if our time was done and it was their turn to live in the flat.

We kicked them out and changed the lock. I like my frontier flat. It changes every day.
Posted by Reeko at 09:55 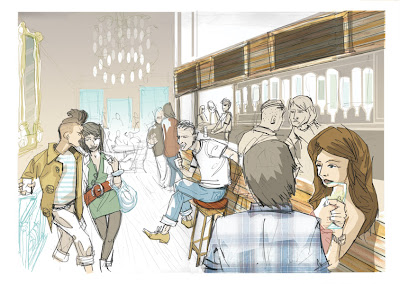 When out on the town out to meet the ladies, having your mates with you can be both talismanic and a hindrance...

Thumbnail sketch and a glimpse at my photoshop layers below. The highlighted one says "Extra shadow due to laziness". Well, at least I know it! 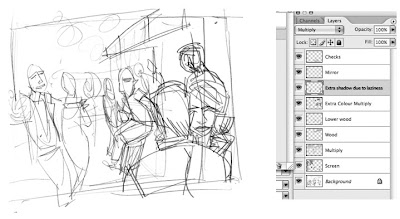 Traffic In The Sky

Hello, been a while. Like everyone who hasn't been credit crunched, I've been busy.

Found time to do an Illustrated song title though, check out the artwork and banter here.
Posted by Reeko at 08:26