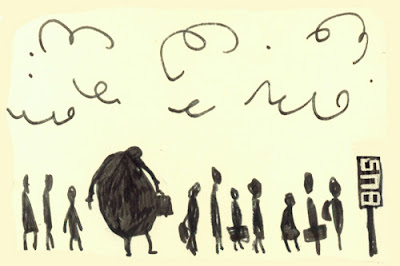 So, I live in London. It's a big arsed congested stinky city.

In said big arsed city I have to take buses and tubes to get around. The tube is over 150 years old (ish)and looks and feels like it and the buses are the worst form of transport known to man. What is it about buses that attracts the crazies and the mentalists? Oh, yeah, that's right, that's the only way they can get around. But why do the have to sit next to me and twitch and shake and sing and talk to the whole world about how crappy life is. Hang on...

Now we're agreed that this blog is the equivalent of the crazy stinky old man on the bus we can get into the meat of this rant. Judging. One of the advantages of public transport is you get to mix with, observe and sentence thousands of people on face value and their behaviour in the 10 or so minutes that you share the same air in a confined space.

With the current obsession in the media with weight in this country, and given the tiny space allotted to each human on public transport, the fatties of this city tend to attract the worst looks. Yup, don't pretend you haven't raised eyebrows and winced when a 20 stone chunker slams down next to you in the only seat available (well, ok, on the seat and you and your neighbour). The natural reaction, well, to me anyway, is to mentally slap yourself around and say to yourself "look, it's probably glandular or genetics and it's not their fault but hang on isn't that three packets of biscuits and a burger in that bag, what are you going to do, like, die if you don't get enough sugar in you before we get to your stop, don't you know there are people starving in..."

Assumption is the mother of all, well, human interaction and judging people is quite rightly frowned upon but almost impossible to stop in the confines of our own heads. We shouldn't give in to these unfounded rages and always try to challenge them and weigh them up against fact and rationality.

And try not to mutter "if I can't get on this crowded bus because of you, fatty..." too loudly at the bus stop.
Posted by Reeko at 10:31