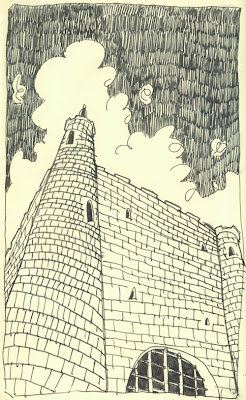 I was thinking about the world, about all it's problems, about the guy who cheated his way into line at the generic coffee shop and I came to a conclusion.

"What was that man?"

I'm going to build me a castle. It's going to have massively thick wall and a moat full of monsters who breath fire from their nuclear charged anuses.

"Hold on a sec? They breathe from their asses?"

Ok, look it's my castle and my monsters, ok? It's not like I'm Darwin or someink?

Now back to my castle. In the Gate house I will have an army of goblins, bred specifically to kill anyone who isn't me. I will, of course, teach them to leave alone my army of servants who will all be trained ninja so I will never hear or see them as they tend to my every wish or command.

Yeah, man, it'd be awesome! You just shout "beer!" and then... Whoooooosh! One would just slide done the table, uncorked by the swish of a katana! Hoovering would just be an occasional swish as dust was destroyed! Food would be scared into being done!

"Hang on, isn't that how Chuck Norris cooks?"

Chuck? Well he'd be my Sherif! He'd be off kicking Kevin Costner's ass. Now for the good stuff...

The Keep would be a giant tower with all your usual Cribs trappings, giant fish tanks, bowling lanes, throne room, damsel-in-distress-window-seats, Lincoln Navigator... and of course the dungeon for people who really hacked me off.

Now, let's get a couple things straight this castle is there to keep all you monkeys out and me in in my own little wonder world! It's a bit "Neverland Ranch" I know, but unlike Michael I've had it hard and so know the value of money. I don't need a Zoo, I have my goblin army to keep me entertained. They come cheep because they eat each other and breed faster than amoeba so they'll pay for themselves. Chuck of course would come at a pretty penny but then I could always just keep him so drugged up on killing Merry Men that he'd never know all that cash wasn't going into his off shore bank account.

Right, I suppose I'd better go apply to Hammersmith and Fulham council and see if they'll let me build it on Shepherds Bush green. I don't want to be too far out of town after all...

Oh and I'll get the pitch ready for Dragon's Den. They are just going to love it!
Posted by Reeko at 18:52