When Brain Is Empty Lies Will Come From Mouth 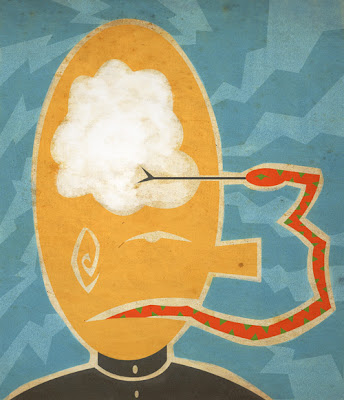 So, I been a hustling.

I been walking those mean streets (this is a lie) and shaking down contacts (not eye contacts and also a lie). I been talking my way in and out of some big contracts (also a lie) and making the deals of my life (great stinking whopper of a fib)!

"So you like, handed out a couple biz cards and shock a hand or two. Pretended to like Arsenal."

No man, you got it all wrong! I could never side with the Scummers!

Truth be told I'm coming to the end of a long period of employment and will be back out in the cut throat world of full time freelancing. Can't wait really, but my position does mean I've been doing some of the old schmoooooze...

See there comes a point when one is talking out of one's behind to impress some dull commissioning monkey (not you, all the others!) when one's brain begins to implode and you realise you've created some whopping giant fib out of complete desperation and boredom. One memorable instance, not actually to a client but a group of super bland people, I just lost it and preceded to rub my future wife's belly screaming "Good for boys!".

Now, I'm not proud of my actions and in my defense I was a young stupid man. I still am young and stupid but I'm no longer... ha ha! Made you look! See! There I go again! I run out of ideas and my mouth just flaps away like a headless chicken with no communication whatsoever with mister b-r-a-i-n...

If I was a computer someone could write a little script or application that as soon as it detected "Desperation Huge Giant Show Off Lies Syndrome" would insert the phrase "Really nice to meet you! Lets go for a drink soon!" and propel me towards the bar or nearest exit.

Since I can't upgrade my operating system I'll just have to learn. How 20th century...
Posted by Reeko at 21:35