A Slightly Fishy Stitched Together Concept 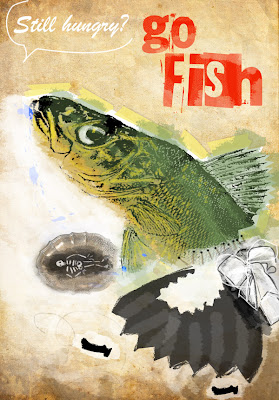 Does anyone else, after they've sweated and strained to complete their image for IF, quickly check before they post that they've done the right damn theme?

Well I do because, as I'm sure I've mentioned before, I am a bit of a doofus.

Now as those who suffer from a similar affliction will know one's personal doofusness will manifest itself most commonly in public, always when one is trying to be suave, slick and sophisticated and most often when a member of the service industry is trying to serve me something.

There I am, sitting outside at one of Athens' (Greece) most popular cafes (This is not unusual for me, as the missus is a local) drinking Frappe and enjoying the perfect temperatures of a late Easter afternoon. I decide my upper body is a couple degrees above a comfortable level and so decide to remove my sweater. Knowing that in a crowded area there are many pitfalls for the doofus, so I decide (oh so stupidly) that speed is the ticket! So I quickly whip the shirt off... smashing the tray of the passing waitress and the two milky drinks over her... chest... area!

Benny Hill could not have planned it better! The situation was not helped by my automatic reaction of jumping up and trying to help by beginning to motion towards the area with my hands and then thinking better of it so essentially making groping motions towards her to the merriment of around 200 hysterically laughing Greek bikers.

What the image about? Oh, er... Stitching, collage... fish obviously... er... Mermaids because they are Humans and Fish stitched together... so I cunningly reversed them and... All right, leave it out! Tough one this week!
Posted by Reeko at 16:48