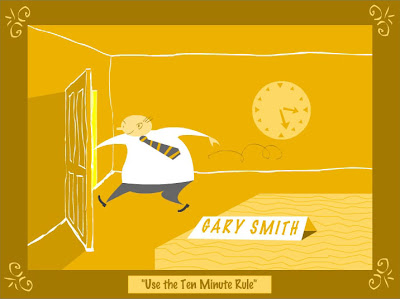 I broke a bunch of rules with this one.

First rule to break, price! I did this as a freebie for a client of ours at work. He's not even a illustration client so that was dumb too. However, I was bored, we've slowed down this near xmas and it was bit of fun.

I guess that's one of the problems of doing your hobby for a living (apart from the long hours) is when your not doing anything and someone ask you for a favour... it's pretty hard to say "No! You must pay me full wack!" as any car mechanic or builder would probably do. I should though. It's good practice.

However I am on someone else's clock at the moment, so I don't really give a monkey's about payment, since I'll get paid anyway! Still, not the right attitude in a forward, industry thinking way.

Second rule that I broke; I did the image without knowing what I was about. I was sent a faxed scribble that had the basic elements in place, the desk, the door, the man, etc and I read the title "Use The Ten Minute Rule" and assumed it was some dumb in-joke. So I did the image.

Then, as I was finishing up, I thought, "I'm sure I've heard this before... somewhere..." so I googled it like I should have done in the first place. See here.

Acknowledge, "I don't feel like doing that," but do it for 10 minutes anyway. That gets you over the hard work of initiation. After being involved in the activity for 10 minutes, then decide whether to continue. Once you're involved, it's easier to stay with a task. Succeeding at a task does not require that you like doing it.

Sounds like a good idea to me! Not so great for my illustration though. I could have a ball with a topic like that! Never mind, I altered some of the positioning of the figure to help with conveying the idea and sent it in. Oh and "Who is Gary Smith?" I hear you ask. Well this is an xmas present for him and I've no idea what he looks like! Fingers crossed he looks vaguely like this guy... What else can you do?
Posted by Reeko at 12:43