Back in the Saddle

So, this is how it works. I'm warming up to the blogging, so I thought I'd explain how I warm up to draw. By returning to something comfortable, practiced and easy! People!

Now I say easy, it's not really. And easy also implies that I've nailed it. I haven't, not by a long stretch. In fact I'm only just getting started on it having been at the task for nearly all of my 26 years. A tutor at university told me once he'd spent 40 years drawing trees and still hadn't found a satisfactory way to do it. Kind of explained his hair cut I must admit...

This is really how it works. I open the book, pick up the pen, start at the face. Why? It's the first thing you look at when you look at people, unless you're an ass or boob man. From face to hair to neck to shoulders to body and so on. Pen scribbling, fast and furious. Fingers communicating with the hand, telling the brain where to move next. (This isn't scientifically how my body works, by the by. I'm no medical marvel!) 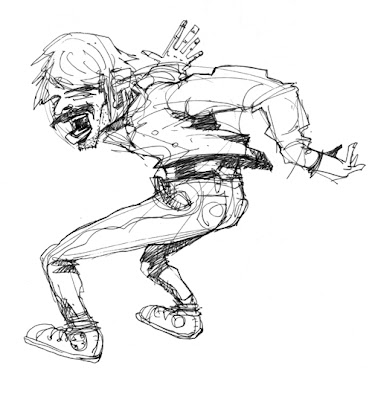 This guy happened around an oval. I was drawing the guy below, who I'd seen that afternoon, in bar or on the tube or somewhere. He'd been much more interesting to look at in real life and I was unhappy with my drawing of him. But that's the way it often goes! Move on man! New pastures! Next one will be the one! Whilst sketching him my pen flicked up an oval on the right hand page so I built a sketch around it, pushing out the arm and legs in a twist turn of sorts, adding a screaming mouth and rakish 'tashe. The kind all the Aussie's who frequent my local boozer seem to be sporting. I did want to "check" his shirt but I figured that'd spoil the flow. Gotta know when to stop...

This was the first sketch of these three. I've stuck it in the middle. Helpful, huh?! The guy I saw on the tube! You're still with me! I know you are!

The guy below I drew whilst watching TV, probably "100 greatest stupidest purchases of the rich and famous, volume 27". He might be a "Celebrity", he may just be "Some Guy". He's a pretty fluid guy though, I kinda like him. Now I come to look at him again, maybe he's the guy for "Razorlight"... Does it matter? No... 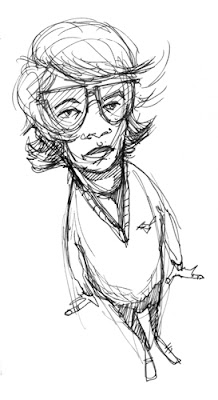 Ok, I'm going to write less next time. This is supposed to be about the pics, not my ranting.