Roses For The Dead – Process

I've stayed away from these kind of process posts mainly because I think they can either be fascinating, deadly dull, or even worse remove any kind of mystery from the artwork! I decided to have a bash at one now because, well, I think there's a bit of a story and a lesson in the tale.

As well as posting drawings here I also post on another blog that I started with some designer friends called "Illustrated Song Titles". The idea is a simple one. Every month one of us sets their iTunes to shuffle and hits play. The first song title that comes up we then have a month to illustrate. The focus is on experimentation and a mutual desire to have some fun away from the compromises in our professional work.

This month the song chosen was "Roses For The Dead" by Welsh emo rockers Funeral For A Friend from their second record "Hours". As usual I let the title run around my brain for a week or so before sitting down with a pencil and thumbnailing out my ideas. 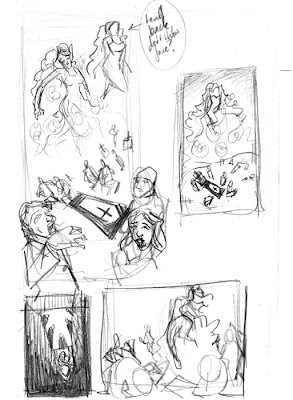 I was very focused with one idea from the start of a ghostly apparition floating from a grave with mourners looking into the grave in distress, or up in shock at the ghost. The roses in the title would flow and blend with the apparition's dress as she floated up towards the sky.

As per usual this involved putting everything and the kitchen sink into the image, my biggest problem in the concept stage. I don't worry about this too much because I know I can edit everything down later in the computer. With this in mind I moved on to a larger sketch to think through the problem. I think of producing final artwork as really a series of problems to be solved while retaining the emotion from the concept. From composition to form and colour all these issues need to be researched and explored with decisions made accordingly. This is also where I went wrong by trying to cheat. 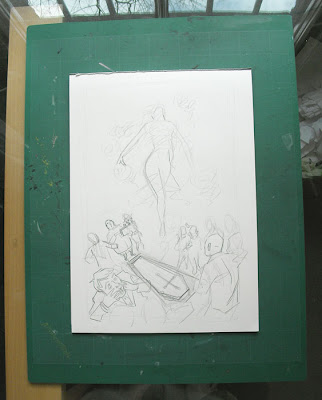 I blasted on ahead into the drawing without really researching many of the issues through, mainly with the main figure, hoping that I could fudge it with an overrated opinion of my own drawing ability. Unhappy with the size of the mourners and changing my mind about, well, a lot of things I got some more reference and had another bash at it. 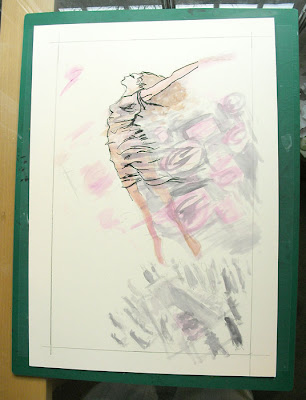 You can see the point where I gave up on this one! It was all too.. literal. I wasn't happy with any of it, except maybe the mourners who I had decided by now were just too obvious an idea. I wanted to be more ethereal with the image and mainly to just keep it simple, stupid.

I did some more reference searching and found something more inspiring. I also simplified my medium, taking just black ink and beginning to draw. I have a habit of filling any sized paper I'm given so I often end up taping extra sheets to my work to get the room I need as the image develops. This got kind of out of hand as you can see in the final artwork! The large pieces of paper are roughly A3 size and as I only have an A4 scanner I knew I was going to have my work cut out for me later, pasting the image back together. Never the less I pushed on knowing that I was going in the right direction and I painted away trying to be as free as I could with the brush strokes realising that I wasn't getting everything right but knowing I could fix it later. 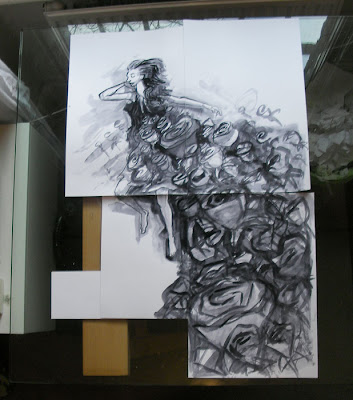 After a couple of hours scanning and pasting I began the task of putting the thing together. You can probably see all the changes I made, mainly reducing the size of the figure, redrawing her face and pushing around the shape of the roses until I was happy with it. 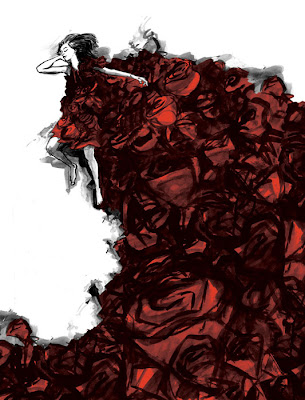 So there you have it! Deathly boring, artistically ruinous or interesting? I was hoping I'd come up with something pithy and clever to demonstrate a clear lesson through the process, but I guess truthfully what I got out of this one is a simple reminder. No matter how clear you are with the idea in the first place never be afraid to push a new direction if you come across a better solution along the way.
Posted by Reeko at 10:00