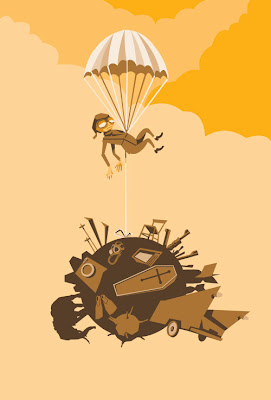 In reality it's about two months. Funny how that works. When I do go on holiday I'm a fairly light packer but I suffer from the man disease of having bought a stupidly big bag with literally thousands of pockets and technical stuff on it. I only own one bag like this, bought perhaps under the illusion that I may one day need it when I need to flee from alien invaders or the zombies that seem to attack London every couple of years in those big screen news reports that some people call "movies". In recent years they've attacked central, north and east London so I've been safe in the west. That hasn't stopped me stockpiling weapons and tinned goods. You should see the flat! Looks like an illustrator's been locked up in a bunker to survive a nuclear holocaust.

So, what tends to happen with my big escape-from-evil bag is that due to my light-ish packing tendencies there is an amount of space in the bag for say... hairdryers, extra pairs of heeled shoes, winter coats, washing machines and all the other essentials that the significant other in my life tends to add to the pile in the last few seconds before we leave the house.

Never mind, I am an adaptable action hero. There's always room in the millions of pockets for those essentials in this stupid bag. Plussing as which, don't zombies faces melt when you blast a hairdryer on them?
Posted by Reeko at 07:11