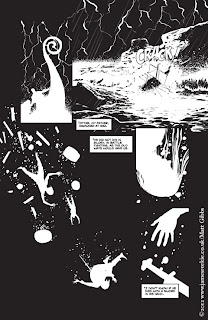 I recently completed another short story, "Otherworld Sailor", with my frequent collaborator, writer and editor Matt Gibbs. The story is being published in "Overload #1" which is launching at Kapow next week. Cribbed once again from Matt's site;

Overload #1 launches at the Kapow! Comic Convention on May 19-20th, 2012. A black and white anthology put together by Martin Conaghan, its aim is to showcase the work of established talent in the UK and introduce new creators to the comics industry.

This issue features a story by James Reekie and I called Otherworld Sailor, which is set in a Viking village soon after their conversion to Christianity and tells the story of the community dealing with a strange visitation.